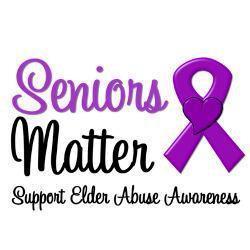 What is Elder Abuse?Each year hundreds of thousands of older persons are abused, neglected, and exploited. Many victims are people who are older, frail, and vulnerable and cannot help themselves and depend on others to meet their most basic needs. Abusers of older adults are both women and men, and may be family members, friends, or “trusted others.”

In general, elder abuse is a term referring to any knowing, intentional, or negligent act by a caregiver or any other person that causes harm or a serious risk of harm to a vulnerable adult. Legislatures in all 50 states have passed some form of elder abuse prevention laws. Legislation and definitions of terms vary considerably from one state to another, but broadly defined; abuse may be:

• Physical Abuse
Inflicting physical pain or injury on a senior, e.g. slapping, bruising or restraining by physical or chemical means.

The failure by those responsible for providing food, shelter, health care, or protection for a vulnerable elder.

• Exploitation
The illegal taking, misuse, or concealment of funds, property, or assets of a senior for someone else’s benefit.

• Abandonment
Desertion of a vulnerable elder by anyone who has assumed the responsibility for care or custody of that person.

• Self-Neglect
characterized as the failure of a person to perform essential, self-care tasks and that such failure threatens his/her health or safety.
Most importantly, be alert. The suffering is often in silence. If you notice changes in a senior’s personality or behavior, you should start to question what is going on.
Remember, it is not your role to verify that abuse is occurring, only to alert others of your suspicions.

The older population–persons 65 years or older–numbered 39.6 million in 2009 (the latest year for which data is available). They represented 12.9% of the U.S. population, about one in every eight Americans. By 2030, there will be about 72.1 million older persons, more than twice their number in 2000. People 65+ represented 12.4% of the population in the year 2000 but are expected to grow to be 19% of the population by 2030. (Reference: Administration on Aging)

A Profile of Older Americans: 2010